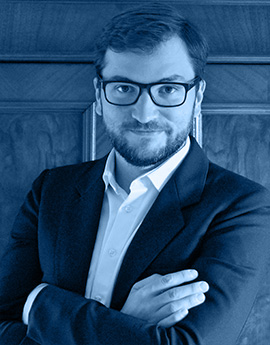 Panel Session 2 : “Machine Learning and Artificial Intelligence: On the mass-adoption of autonomous systems and the gap between empirical and normative perspectives”

Dr. Oskar Josef Gstrein, MA, LL.M., PhD has studied law and philosophy in Innsbruck, Austria and obtained the Magister iuris and the Magister philosophiae diplomas. During his PhD Project entitled « The Right to be forgotten as a human right – is there a future for human dignity in the Digital Age? » he published several articles on the subject. The thesis was defended in November 2015 and awarded the grade « summa cum laude ». The book was published in March 2016. From October 2015 he was a Post-Doc research fellow at the Security, Technology & e-Privacy (STeP) Research Group at the University of Groningen. In this role he also supported the United Nations Special Rapporteur on the right to privacy during the first three years of his mandate. In July and August 2018 he was a fellow at the Institute for Technology and Society in Rio de Janeiro, Brazil. Since September 2018 he works at Campus Fryslân where he is a member of the Data Research Centre in Leeuwarden. He is carrying out research in the EU Horizon 2020 project « Cutting Crime Impact » and teaching in the program « Governance and Law in Digital Society ».